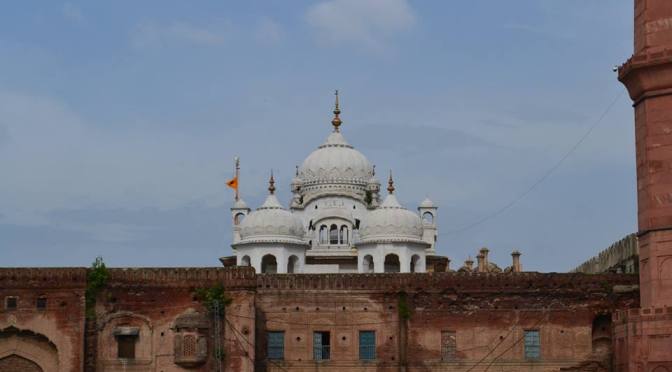 Samadhi of Maharaja Ranjit Singh (Tomb of King Ranjit Singh), located adjacent to famous Lahore’s landmark Badshahi Mosque, is a mausoleum containing funerary urns of short time Sikh ruler of Punjab – Maharaja Ranjit Singh. Although he conquered the region by defeating Muslim Mughal emperors however it is said that he never seated on their throne in regard to their legendary reign of few centuries.

Wall of Lahore Fort (left) and Entrance of Samadhi of Ranjit Sigh (right). Unfortunately, only Sikhs and Hindus are allowed to enter in this building. Muslims not allowed :(. I tried to convince the guard to let me in but vain. Literally, they were checking Identity Card of each individual to verify the religion. Too strict. Yea, there are Hindus and Sikhs in Pakistan as well. Can you different them in below mix gathering when some are heading to Badshahi Mosque and some to Ranjit Singh Tomb?

After his death, according to their religious customs, his wives and slave girls were burnt alive with his corpse. The construction of mausoleum was started by his son Kharak Singh on the spot where he was cremated and was complete by his youngest son Duleep Singh in 1848. As per their traditions, Ranjit Singh’s ashes were put in vase and were placed inside building.

The king was keen of keeping horses. His favourite horse, stuffed and showcased at Lahore Fort Museum.

Experiences of a Muslim traveller across cultures

The main purpose of my website is to:
- Introduce my country Pakistan to the rest of the world.
- Keep track of my travelogues and share with you.
- Try to present the real peaceful image & basics of Islam
- Explore Islamic historical places specially Makkah and Madinah which are Muslim only places and are not accessible to Non-Muslims.

Mostly, I use Nikon D3100 camera for photography. Though occasionally, I also take pictures from Samsung S5 or Nokia N97 mobile.
All photos (except two, see if you can find them) in this website are raw as taken from camera without any post processing to make sure that real scenario is portrayed.