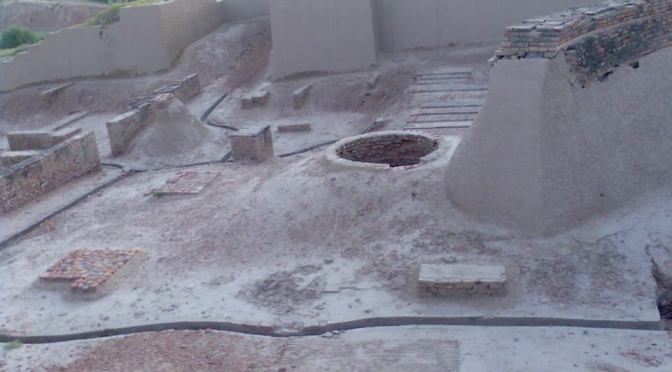 The Indus Valley Civilisation was a Bronze Age civilisation (3300–1300 BCE; mature period 2600–1900 BCE, pre-Harappan cultures starting c.7500 BCE) in present day Pakistan and including some parts of India and Afghanistan. Along with Ancient Egypt and Mesopotamia, it was one of three early civilisations of the Old World, and the most widespread among them, covering an area of 1.25 million sq.km.

Harappa was one of the two great cities of the great Indus Valley Civilisation. Mohenjo-daro ruins are bigger than Harappa and are located in Sindh province of Pakistan. Today there is a small town just few kms away from the ancient Harappa archaeological site. Sahiwal is the nearest city located at 24km from Harappa.

This civilization with a possible writing system, urban centers, and diversified social and economic system, was rediscovered in the 1920s after excavations at Mohenjo-daro and Harappa.

Our visit to this site was not planned. In fact we went to see our relatives in Sahiwal. To avoid some boredom, our uncle suggested to visit this place. Ready as ever, we immediately made a plan and left for the Harappa site in evening. It took around 45 minutes to reach the place. The road condition was average. The land around the Sahiwal city is good for agriculture and farming so we often encountered heavily loaded trucks with vegetables or animal feed.

Board near entrance of Harappa archaeological site displaying info about Indus Civilisation and ancient Harappa city.

A large well and bathing platforms are remains of Harappa’s final phase of occupation from 2200 to 1900 BC. Strange to see that bricks were still in good condition.

There was also a small museum near Harappa site displaying artifacts and relics of old times. A male skeleton excavated from Harappa cemetery.

There also lies a grave of Nau-Gaza peer (nine yards tall saint) in neighbourhood of Harappa site. Numerous fables associate with it. The most famous one is that long ago a tall man cum giant came from somewhere in this area, he sided with locals and fought against invaders. The noble tall man died and buried at this place. Another tale, in ancient times, a rich man died and he was buried in this grave with his belongings. Some also call it grave Nur Ghazi Peer (Nur Ghazi Saint). Who was he??? aaaann…I don’t know. This grave is literally very long, could be nine yards in length but what’s inside, no one knows. My personal opinion – It’s just concrete :).

Sorry for poor picture quality, perhaps best result of my 5MP mobile cam. As it was not a planned trip so I was not well equipped with my gears but we definitely enjoyed this sudden plan.

6 thoughts on “Ruins of Earliest Human Civilisation – Harappa in Pakistan”

Experiences of a Muslim traveller across cultures

The main purpose of my website is to:
- Introduce my country Pakistan to the rest of the world.
- Keep track of my travelogues and share with you.
- Try to present the real peaceful image & basics of Islam
- Explore Islamic historical places specially Makkah and Madinah which are Muslim only places and are not accessible to Non-Muslims.

Mostly, I use Nikon D3100 camera for photography. Though occasionally, I also take pictures from Samsung S5 or Nokia N97 mobile.
All photos (except two, see if you can find them) in this website are raw as taken from camera without any post processing to make sure that real scenario is portrayed.